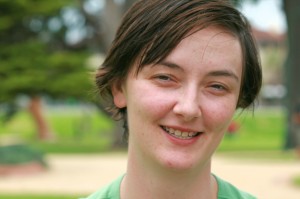 I’ve programmed since I was a kid. I’ve loved the idea of open technology since I read a curious article in the 1990s about people all over the world, fixing complex bugs in an operating system that a university student had named after himself.

Thus, I’ve been a volunteer creating communities by and for women in open source since 2000. It’s been the equivalent of an unpaid part-time job for several of those years. But a year ago, Valerie Aurora became more ambitious, and proposed that since we were doing real work, we should do it as our real job. Together we created the Ada Initiative, a non-profit supporting women in open technology and culture. We rely on your support for our work:

Within a year we’ve organised our first AdaCamp, surveyed thousands of people about their perspective on women in open technology and culture, wrote and encouraged adoption of an anti-harassment policy by over 30 conferences and organizations in open tech/culture, and much more.

To continue our work in 2012, we need your help! Please donate to the Ada Initiative, and contribute to our planned work, including future AdaCamps, methodologically rigorous research into women in open source, and training for women contributors to open tech/culture projects and their allies.

Donate now: we can’t do it without you!