Last year was my sonÂ’s last year before he began full time schooling in 2015. I have spent the last year reviewing child-focussed activities in Sydney as “The Sydney Project”. Because V has begun school, the Sydney Project is concluding here with an activity he went to with Andrew in January. You can view previous entries throughout 2014 and early 2015. 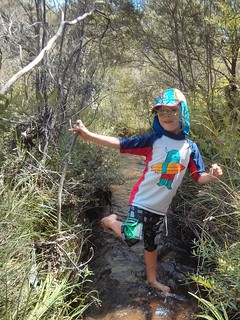 In mid-January, Andrew took V to a Wild Ground experience morning. Wild Ground is a new Blue Mountains business that conducts “creative nature-play” activities, and V had a morning adventure courtesy of us supporting their crowdfunding campaign to launch the business (see disclosure at the end). The event was at Minnehaha Falls Reserve; they began in the park with some singing and music before walking down the trail to a creek. Wild Ground’s Rick Webb laid out some “treasure” (coloured sticks) on the trail to encourage the kids to look around; they collected both the coloured treasure and anything else of interest. 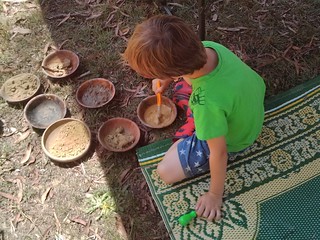 The group walked further down the trail to a small watering-hole and then back up the creek itself; Andrew was taken with the lesson here about micro-geography (I guess you’d say), I’m not sure if that was deliberate. After returning to the top the kids snacked on fruit and had a chance to try slacklining and did some crafts with natural paints. Andrew says that V initially mistook the slackline for a finish line and thus had to enact a spontaneous running race, but that he was also the child who was most into the slacklining proper, which otherwise got a bit of a mixed reception from the children.

V fell asleep in the car on the way home, Andrew summarises as “Outdoor activity that wears kids out. Tick!” He didn’t think that V was enchanted with or overwhelmed by the experience, but that it was a fun day outside for them both.

Cost: an equivalent experience doesn’t seem to be available now that the crowdfunding is over. Wild Ground’s Creative Bush Adventures for older children are $60, and term-long Bush School programs start at $115.

Recommended: a bit hard to say, since I don’t think this precise program is an ongoing part of their activities. But it suggests their programs would generally be a happy and interesting day for children.