Nintendo has just launched a new feature for the Wii, called "Everybody Votes", letting Wii owners vote on such crucial questions as Dogs or cats? (Dogs says the world) and Eating or sleeping? (this was a ‘regional’ poll, which I think means Australia-wide, and Australia says Sleeping). A new question seems to open once a day or so, and Wii owners can submit questions for possible inclusion.

As of right now, you can vote on a variant of a question I chose, at least in Australia. They have a feature for suggesting questions and last night I had the brilliant idea to suggest that old personality test: Which superpower would you rather have: flight or invisibility? (The personality test works like this: flying people are less concerned with others and more concerned with solo adventures, and invisible people are snoops.)

However, either they didn’t understand the fundamental beauty of the question (although their replacement answer is suitable for testing snoopiness) or invisibility just isn’t cool enough. This morning I turned on the Wii, and here’s what we were asked to vote on:

Which superpower would you like to have? X-ray vision or flight? 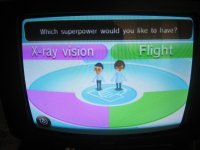 I still think I am the brains behind this question though.