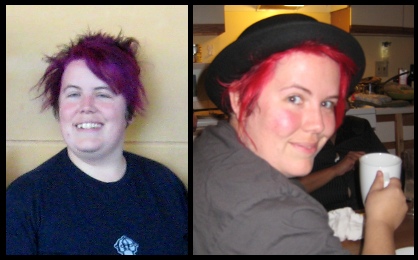 I’ve run across Kirrily Robert in any number of capacities. Originally it was in 2001, presenting at linux.conf.au about the work of her then employer, e-smith. She and I and several other people went to a LinuxChix BoF. We’ve only met one other time in person, I think, and she performed the essential service of introducing me to Ackland Street St Kilda and mentioning that there are very rummy rum balls to be had there. (Very large ones too, it turns out, about the size of a fist. Don’t buy two.)

I admire Skud for her generalist interests and her leadership. In a decade or so of following her blogs and occasionally contributing to her projects, there’s been Perl hacking, Perl community, fandom, social media, geek feminism, geek etiquette, Freebase…

One of Skud’s specialties is seizing expertise by the throat. She writes and talks about whatever is interesting her constantly, learning and teaching at the same time and thereby making herself central to the community around it. I also admire her embrace of generalisation: of focussing on breadth as well as depth.

It’s hard to write about generalists without making it sound like a second prize, so I want to address that specifically. Firstly, I don’t think depth versus breadth of interests is a zero sum game. Certainly there’s a trade-off at some point, but I think geek culture creates a quite artificial separation between the intense take-all intense interest and expertise and those other people in second place, with their shallow fiddling around. (I suspect geeks have inherited this from academia.) The people I know achieving the most at the moment are all in some way generalists and Skud is at the forefront. Skud is an uber-geek. There’s nothing she’s interested in that she’s not geeky about. If I ever want to unashamedly get my teeth into Perl, Freebase, knitting, Age of Sail fandom, or historical household arts, I know where to go.

I’ve obviously been closely involved in the Geek Feminism project, which is why I’m choosing to write about Skud this year. No other person in technology has influenced my life and time so much recently. Skud’s big success in founding this was that she took the intense reaction to her OSCON keynote and built upon it. Considering the amount of venom around both the general topic of feminism and specifically feminist claims that geekdom’s individualist utopia might still be systemically difficult for women, it’s really really hard not to throw a stone and then run and hide for a few years. And I’m really really pleased that someone didn’t, and I think this is typical of Skud: she creates, builds and unifies. Watch and learn!