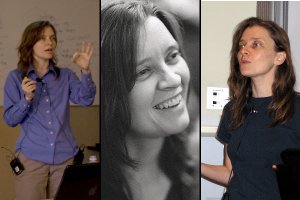 Allison Randal is the chief architect of the Parrot virtual machine, which, I have just now discovered, had their 1.0.0 release a week ago today. I’ve known of Parrot for a long time, because of its posited relationship with the Python programming language (see the original April Fool’s joke), but I didn’t know much about the project beyond it being a VM until Randal’s linux.conf.au 2008 talk (see slides, Ogg Theora video, Ogg Speex audio).

I am not a Perl programmer and Randal is mostly known within the Perl (and OSCON, see below) communities, but Randal’s talk at linux.conf.au 2008 was the most memorable for me: she talked about bringing modern compilation ideas to the Free Software programming languages community, and then about the architecture of Parrot and the various intermediate languages it is possible to target.

The most striking thing about Randal’s work for me is that she combined high profile technical coding with deep community involvement (and technical writing). She is a past president and current board member of the Perl Foundation and chairs the talk selection for OSCON. In an ideal world I’d like to be able to straddle technical and technical community work in my own life, and Randal is one of the highest profile examples of this I know of.