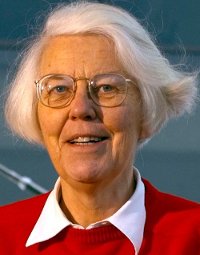 Karen Spärck Jones by Markus Kuhn (modifications by Mary Gardiner) is licensed under a Creative Commons Attribution 2.5 Australia License.
Based on a work at commons.wikimedia.org.

I first heard about Karen Spärck Jones, who was a senior scientist in my field of computational linguistics, in 2007 as part of my paying job, which is as the editorial assistant for Computational Linguistics. Just before she died, Spärck Jones wrote Computational Linguistics: What About the Linguistics? which we published posthumously as the Last Words column for Vol. 33, No. 3. (Spärck Jones was aware both that she was dying and that her column was going to appear under the heading ‘Last Words’.) I was never able to correspond with her directly: she died before we even had the camera ready copies done.

Spärck Jones’s academic career began in 1957, and was funded entirely by grant money until 1994: most academics will recognise this as a hard way, requiring researchers to fund their own positions with grant money awarded in cycles.

Spärck Jones was the originator of the Inverse Document Frequency measure in information retrieval (1972, A statistical interpretation of term specificity and its application in retrieval., Journal of Documentation, 28:11–21) which is nearly ubiquitously used as part of the measure of the importance of various words contained in documents when searching for information. (The word ‘the’, for example, is very unimportant, as it occurs in essentially all documents, thus having high document frequency and low inverse document frequency.) She had a long history in experimental investigations of human language (most computational linguists are now in this business). She was also at one time president of the Association for Computation Linguistics.

Awards Spärck Jones won in her lifetime include Fellowships of the American and European Artificial Intelligence societies, Fellowship of the British Academy, the ACL Lifetime Achievement Award and the Lovelace Medal of the British Computer Society.