This was our second visit to the Powerhouse Museum, both times on a Monday, a day on which it is extremely quiet. 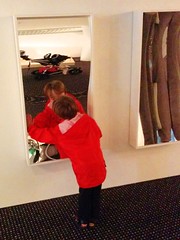 The Powerhouse seems so promising. It’s a tech museum, and we’re nerd parents, which ought to make this a family paradise. But not so. Partly, it’s that V is not really a nerdy child. His favourite activities involve things like riding his bike downhill at considerable speeds and dancing. He is not especially interested in machinery, intricate steps of causation, or whimsy, which removes a lot of the interest of the Powerhouse. Museums are also a surprising challenge in conveying one fundamental fact about recent history: that the past was not like the present in significant ways. V doesn’t really seem to know this, nor is he especially interested in it, which removes a lot of the hooks one could use in explaining, eg, the steam powered machines exhibit.

We started at The Oopsatoreum, a fictional exhibition by Shaun Tan about the works of failed inventor Henry Mintox. This didn’t last long; given that V doesn’t understand the fundamental conceit of museums and is not especially interested in technology, an exhibit that relies on understanding museums and having affection for technology and tinkering was not going to hold his attention. He enjoyed the bendy mirrors and that’s about it. 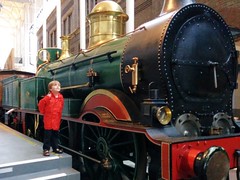 I was hoping to spend a moment in The Oopsatoreum, but he dragged me straight back out to his single favourite exhibit: the steam train parked on the entrance level. But it quickly palled too, because he wanted to climb on and in it, and all the carriages have perspex covering their doors so you can see it but not get in. There’s a bigger exhibit of vehicles on the bottom floor, including Â— most interestingly to me Â— an old-fashioned departures board showing trains departing to places that don’t even have lines any more, but we didn’t spend long there because V’s seen it before. He also sped through the steam machines exhibit pretty quickly, mostly hitting the buttons that set off the machines and then getting grumpy at the amount of noise they make. 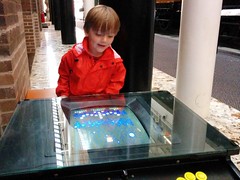 He was much more favourably struck with the old game tables that are near the steam train. He can’t read yet, and parenting him recently has been a constant exercise in learning exactly how many user interfaces assume literacy (TV remote controls, for example, and their UIs now as well). The games were like this to an extent too; he can’t read “Press 2 to start” and so forth, so I kept having to start the games for him. He didn’t do so well as he didn’t learn to operate the joystick and press a button to fire at the same time. He could only do one or the other. And whatever I was hoping V would get out of this visit, I don’t think marginally improved gaming skills were it, much as I think they’re probably going to be useful to him soon. 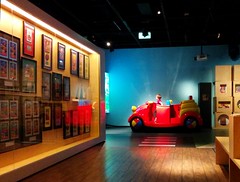 We spent the most time in the sinkhole of the Powerhouse, the long-running Wiggles exhibition. This begins with the annoying feature that prams must be left outside, presumably because on popular days one could hardly move in there for prams. But we were the only people in there and it was pretty irritating to pick up my two month old baby and all of V’s and her various assorted possessions and lump them all inside with me. I’m glad V is not much younger, or I would have been fruitlessly chasing him around in there with all that stuff in my arms. 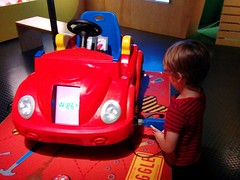 It’s also, again, not really the stereotypical educational museum experience. There’s a lot of memorabilia that’s uninteresting to children, such as their (huge) collection of gold and platinum records and early cassette tapes and such. There’s also several screens showing Wiggles videos, which is what V gravitates to. If I wanted him to spend an hour watching TV, I can organise that without leaving my house. He did briefly “repair” a Wiggles car by holding a machine wrench against it.

Overall, I think we’re done with the Powerhouse for a few years.

Recommended: for my rather grounded four year old, no. Possibly more suited to somewhat older children, or children who have an interest in a specific exhibit. (If that interest is steam trains, I think Train Works at Thirlmere is a better bet, although we cheated last year by going to a Thomas-franchise focussed day.)