When I say “child-focussed”, I really mean “Mary’s inner-child-focussed”. Much like Wet n Wild, Skyzone, which is a warehouse full of trampolines, was really more for me.

The structure is that you buy access for an hour. I don’t know if they were full up for our hour, but it was the middle of the day on a weekend, which tend to be their popular times. If so, their capacity management is pretty good overall.

It didn’t start off very promisingly, with V and Andrew queueing up for a quite a while for the foam pits: 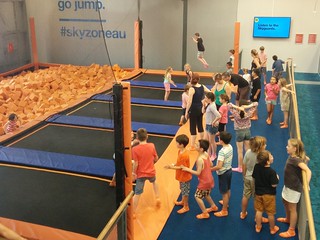 I was a bit grumpy, because when there’s a one hour access window, spending most of it in queues doesn’t seem fun. Even if there were moments of fun to be had: 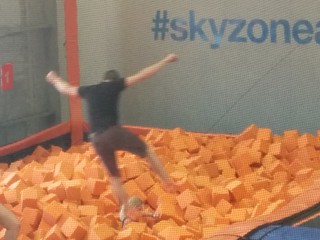 But the foam pits have the worst of the queues. V soon moved onto the basketball trampoline, and actually his shot was half-decent: 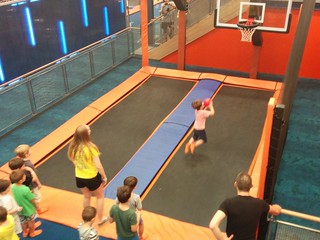 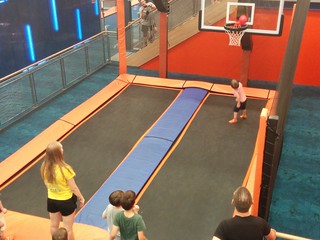 We spent most of the hour on the free trampolines, for which there aren’t queues: 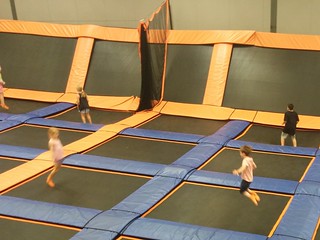 And which still have ample fun for adults: 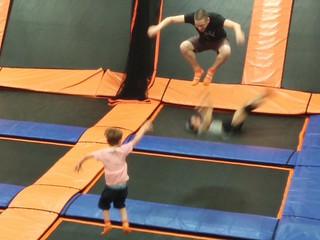 (nb, Andrew is not jumping on the person who has fallen, it’s a trick of perspective. You know, if you wondered!)

Of course, things that you recall being easy as a kid always turn out to be an epic workout. What surprised me was the abdominal involvement called for in lifting my legs up in order to bounce from trampoline to trampoline. And the foam pit is a killer if, like me, you can’t really haul yourself out of, say, a pool without using a ladder (I have a shoulder injury that makes it difficult for me to bear weight and pull up), because it’s about five feet deep and full ofÂ… foam.

But it was great fun. If we lived just a little closer I suspect I’d probably just about live there. I think we had a bit more fun than he did, but then, if you’re following this series you know that he believes that warehouses full of trampolines and parks full of waterslide rafts are a fairly normal way to spend your time. He enjoyed it though. And it’s one of those unicorn physical activities that actually noticeably tired him.

Cost: $16 per hour per jumper, an additional $2 to buy their mandatory socks (which you can re-use). On weekdays there’s a toddler area which is $10 for a toddler and carer. Book in advance online, they often sell out their weekend timeslots.

Recommended: yup! Just a caution that on hot days, their air conditioning is not up to the task. Take water and pick your time of day.