The Australian Museum has two programs for kids: Tiny Tots and Mini Explorers, which are patterned something like Art Safari, with the children doing an activity themed to match a current exhibit. 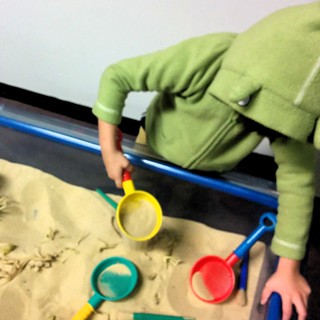 This activity benefited compared to Art Safari in the amount of time available to the children. They started off in an education room with several activities. They first had a short talk about dinosaurs, specifically, working out how big dinosaurs are based on one or two bones. Honestly, this seemed to thoroughly lose most of the children, V included. Most of the remainder revolved around a very shallow imitation of archaeology: finding plastic dinosaurs hidden in sand, or in jars filled with dried lentils. V has not yet absorbed any awe of archeology and regarded this as an exercise in playing with sand rather than a moment of entering into the noblest profession a child can conceive of. The other activity was taking dinosaur shapes cut out of paper (necks, legs and such) and gluing them together into one’s very own dinosaur, which V got quite into.

So no great educational inroads were made, but fun was had. And it didn’t manage to trigger V’s perfectionist tendencies and cause a lot of flouncing and dramatic self-recriminations. 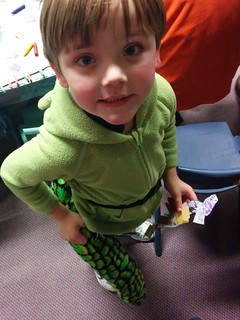 All the children were then given a dinosaur tail to wear Â— I appreciated the staff saying that wearing one was entirely up to the child, although V was perfectly willing Â— and a giant mass of children and parents headed down to the main exhibit. In theory we were supposed to be measuring the various tyrannosaurs and otherwise filling out an activity sheet, in practice we were mostly keeping tabs on our children and keeping the fossils safe from them. Or I was, anyway.

The exhibit itself is great, I’m intending to go back by myself before it’s up to properly appreciate it. The main attraction is Scotty. Andrew was very impressed by the faked shadow they’ve put behind Scotty, which moves and roars periodically. They’ve also done an amusing video which is mock security footage of the museum being invaded by dinosaurs, including live footage of the viewers themselves, surrounded by invading dinos. This took up a lot of V’s time. Less good for children Â— and what I’m going back for Â— is the bits about how, for example, the coloration of dinosaurs is being determined.

The sad thing about taking a young child to this sort of thing is that you cannot impress on them how unusual it is. Australian museums are not full of world-class T. rex skeletons! You won’t get to see this very often! Appreciate it while itÂ… oh never mind.

The only downside was that the ticketing was rather poorly integrated into the massive assembly line that is admittance to the main exhibit. Andrew arrived late and without a phone, and they had to page me down to the information desk to explain that he had a ticket to this workshop, not one of the timed tickets to Tyrannosaurs. We also didn’t know for sure if we were even going to see the main Tyrannosaurs exhibit and nearly bought separate tickets to it. Whoops.

Cost: $12 children and $24 adults, which was reduced a lot for museum members. The year-round equivalent is Mini-Explorers, which is $10 children and $15 adults.

Recommended (kids’ activity): cautiously. They’re well designed programs with a fair amount of thought put into them, but they are, basically, a craft activity and an “opportunity” to chase your child through a museum exhibit. It might be best saved for an exhibit that your child is likely to be unusually interested in.