Luna Park is, honestly, essentially cheating on this project. Do children like amusement parks? Yes. They do. There you go.

In addition, I think four years old is basically about the right age for them. It’s old enough that children are aware that a giant painted face, tinkly music, and carousels aren’t a completely normal day in the world, young enough that the carousel is still just as magical as the dodgem cars. And too young to have horror-film associations with amusement parks, I think that helps too.

It’s also more accessible to a four year old than some more thrill-oriented parks. V isn’t scared of heights or speed, so he loves the Coney Island slides, and was annoyed to find out that he was too short for the Ranger (the ship you sit in that gets spun upside down about ten stories in the air) and the free-fall ride. He is, however, apparently afraid of centrifugal force parallel to the ground, and refused to go on any “octopus” rides.

Even the four year old who wants to go on the free-fall ride is still young enough for, well, frankly dinky rides like the train that goes around about five times in a circle while you pretend to drive it, and the space shuttles that turn in gentle circles and which slowly go up and down when you press a button. His big draw is the ferris wheel, which I found fairly horrifying this time as I read the signs about keeping limbs inside to him and then had to answer a lot of questions about “why? why do I have to keep my limbs inside?” while giant pieces of metal calmly whirled past us with their comparatively infinite strength. In a similar vein, V also enjoys the roller coaster past all reason and sense, whereas Andrew and I react with “this seemsÂ… flimsyÂ…” (I love coasters, but I like them to look overengineered). 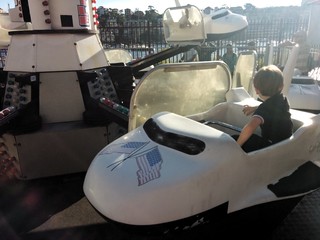 The only things V really didn’t like were the organised dancing groups who were encouraging children to learn their (cute!) 1930s-ish moves, and the process of choosing a child from a hat to press the lever to light up the park at night (he refused to let his name be entered), because there’s some specific types of performative attention that he really loathes. But there’s plenty of children gagging to dance along and to light up the park that an objector goes unnoticed. It’s not coercive fun.

Cost: entry is free. Rides aren’t, an unlimited rides pass for the day starts at $29.95 for a young child and goes to $49.95 for a tall child or an adult. There are discounts for buying online. (The entry is free thing sounds really useless, but it’s actually good if you have several adults, not all of whom are interested in the rides and/or are looking after babies.)

Recommended: indeed. We’ve considered getting an annual pass, in fact.

Disclosure: because of a prior complaint to Luna Park about opening hours (we showed up several months ago at 2:15pm to find that an advertised 4pm closure had been moved to 3pm), we were admitted free this time. No reviews were requested or promised in return for our admission.