This year is my sonÂ’s last year before he begins full time schooling in 2015. Welcome to our year of child-focussed activities in SydneyÂ… only without the Sydney bit this once.

We rudely interrupt the Sydney Project to bring you a Canberra attraction: Questacon. In short, Questacon works nicely for V in a way that the Powerhouse did not, probably because it’s pretty shameless about catering entirely to children, complete with buttons, lights and hard hats.

We were there on a very busy day: the Saturday of the Easter weekend, the middle weekend of NSW school holidays. It was merely obnoxiously busy; I guess being used to Sydney crowds was helpful. That said, we did get there at 9:15, just after it opened. And as it was, the admission tickets to Mini-Q, the under 6 area, which is in limited numbers sessions on busy days, were only available from 11:30 onwards. I think they’d completely gone by about 10:30 in the morning. Go early, go often.

We’ve been once before, about a year ago, and Questacon was a hit to the point where for some time afterwards he asked to “see the science again!”. It took him longer to warm up to it this time. Much like last time, he shot through Measure Island without engaging. It took him a while to settle into Wonderworks, eventually getting interested in the Energy Machine and Frozen Shadow. Much to my disappointment, he’s never given a toss for my precious Harmonograph. (Much of Wonderworks has been there since I was a kid. Questacon’s exhibits are surprisingly timeless in their appeal.) 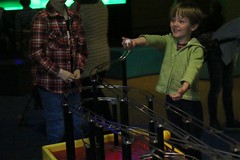 Andrew and I and his father were very taken with the Cloud Chamber, which is in its own little-visited room from the steps between Wonderworks and Awesome Earth (closed for renovations), in which subatomic particles leave continuous trails through a cloud of vaporised alcohol. Andrew is keen to bring a banana next time. V was not willing to stand still for a story about how all the time, everything is being hit with tiny tiny particles moving at high speeds. Perhaps not one for the littlies.

V’s favourite exhibit is pretty unique to him. He can roll ping pong balls down a ball rollercoaster for about an hour at a time. Other children come, roll five or ten balls and go. He stays. We only extracted him with a promise to return after. 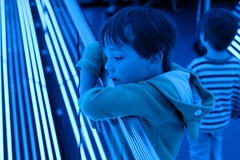 Next up was one for the watching adults, Excite@Q. V was most naturally drawn to the blue tunnel, and he was one of several smaller children jostling under Whoosh to grab a scarf and stuff it back in the wind tunnels. But we were there for one thing: to see our four year old agree to do Free Fall. I wrote about this elsewhere:

It’s a horizontal bar suspended over a very steep slide. You hold the bar. You let go. You drop freely for three metres or so before hitting the slide and sliding to the floor of the room.

The ride is, as you’d hope, very into consent. You go to the top. You get a briefing about how it works. You are told, repeatedly, that it’s OK to say no. And the day we were there, about three quarters of children did say no. (It’s a bit of a study in gender performance actually. Adult men by and large grab the bar, drop themselves down to dangle, let go and are done. Everyone else takes far far longer.)

V loves slides and heights, and so we asked him if he wanted a go. He said yes. He was dressed in the safe suit for it (I guess no risk of catches or tears), he waited in the queue and watched child after child look at the drop and shake their head and walk back down the stairs with an adult for a hug. Andrew took him to the top. He got the chat about whether he wanted to say no. He gave them a puzzled look. He got his instructions. He took them very seriously.

He held the bar: 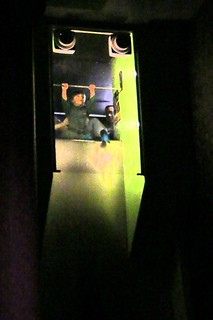 He dropped his weight from it: 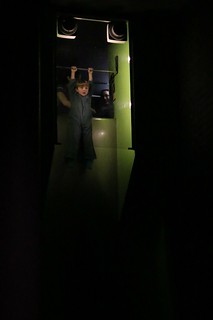 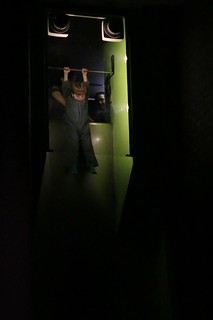 And he let go: 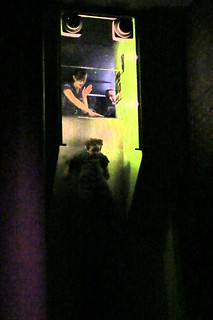 He seemed to have fun, if a mystified about why this was such a very big deal. 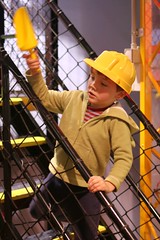 After Free Fall, his ticketed time for Mini-Q came up. I didn’t go in, but apparently it was all construction all the time in there.

Finally, for bonus points, I put my camera down somewhere in Wonderworks, and someone found it and handed it into staff. “People who come to Questacon are generally very honest,” the information desk staffer told me, although somewhat spoiling the effect by saying she’d been tempted to keep the camera herself.

Recommended: yes, has something for the jaded adult radioactivity fans and the child who wants to drop from extraordinary heights, wear a hard hat in a playground, and roll ping pong balls down a slide for an hour alike. Try not to go on holiday weekends, and try not to leave your camera lying around.