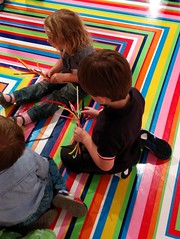 Art Safari is one of the Museum of Contemporary Art’s kids’ activities: a program where pre-school children look at a few pieces of art in the galleries and do some related art of their own. I enjoyed the Art Baby tour a lot and was keen for V to have a go at Art Safari. We were joined by another four year old, AÂ—, and her family. 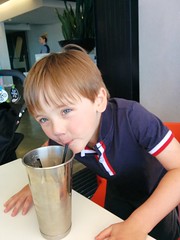 Starting in the cafe with an enormous chocolate milkshake was a non-core part of the experience but got things off to a good start, except that the cafe was a bit of a horror show of mothers’ groups and Mountain Buggy strollers (guilty as charged on the stroller) and my memory of it is of a fair bit of flurrying and crowdedness. We had some trouble getting V and AÂ— to say goodbye to their milkshake remnants and to go to the classroom for their exercise.

They started off with some circle time talking about colours and what things they could think of that had each colour. Which led me to discover that I have the shouty kid who wants to give every answer, specifically, who wants to bellow periodically every time a new colour word comes to mind. At this age, it’s a bit awkward to figure out the division of discipline: am I supposed to step in and tell him to quit it with the bellowing, or is that all under control? (I see this play out each week at swimming lessons too, with parents evenly divided between those hissing warnings to their children to pay attention and work hard, and those with their nose in a book.) 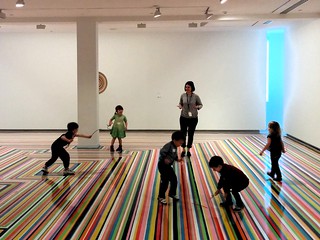 I think there’s a lot of scope for kids to interact with some contemporary art, and the art chosen for this was a good example: a whole coloured floor to pace and march around and to match their coloured pipe cleaners with. Good choice.

A less good choice was the security guard who came over and told me that there is a “no backpacks, no exceptions” rule. I assume this is because backpacks are so liable to knock over art works whichÂ… obviously is a problem, but it would have been really annoying if I’d had my baby in a front pack and then needed to, I guess, carry the backpack around in my hands, since I can’t dangle it off the baby. It’s just generally not the greatest thing in the world, to have no socially acceptable way to lump around the giant haul of nappies and wipes and changes of clothes and such that a young baby requires. I think I’m supposed to leave most of it in the car I don’t own. (Tangent: I wasn’t babywearing that day, but I often do, and it is quite common in babywearing discussions around this issue for it to emerge that many babywearers either are never far from their cars, or never far from their adult partners.) Probably the best way for the MCA to deal with this would have been for the instructor to mention it before we all left the classroom, so I could have left the bag there.

V found the first activity Â— making interlocking circles out of pipe cleaners Â— a bit frustrating (he couldn’t figure out how to twist the pipe cleaner around itself to close the circles), and I was disappointed that the session doesn’t allow enough time for the instructor to notice and help floundering children. That said, each child did have a parent with them, so of course I was able to help him out myself just before he vanished into a big pile of “I can’t, I can’t, it’s so haaaard, I can’t!” 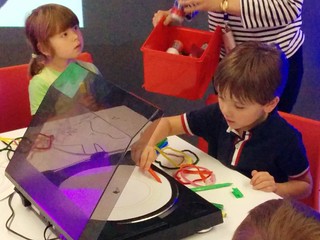 Afterwards we went back to the classroom for an activity he found much more intuitive and fun, holding a texta against a piece of paper as it spun on an record player, so as to draw circles and spirals. I think the instructor tried to briefly mention that this was an older way of playing music, but V in particular, and I think children of this age generally, don’t really grasp that the past was noticeably different from the present and have no interest in cooing over more cumbersome ways of playing music that predate their parents’ era as well. (Although, that must have been fun, back when people got to play music with TEXTA MACHINES!) 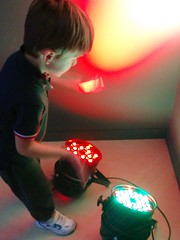 Almost as an aside, the instructor pointed the children at lights that changed colour when you clapped near them, which is nearly as much fun as textas. This was a good microcosm of the whole experience; just slightly rushed. I feel like if each part of it had 10Â–15 more minutes, V would have had more fun. That said, he was very proud of the art he’d made.

Cost: concession is $16.85, general admission is $21.95. I’m honestly not sure if both parents and children are supposed to buy a ticket. I bought one for me and one for him.

Recommended: not for the price. It’s a fine activity, it was however slightly rushed throughout.